THE FIRST STEN IN TWENTY YEARS! 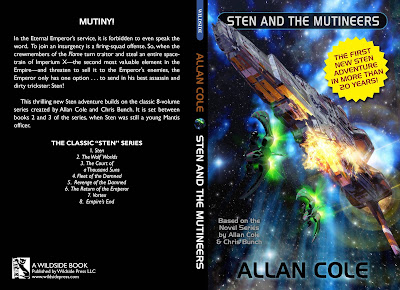 NOW ON SALE:
THE COMPLETE STEN AND THE MUTINEERS
GET THE E-BOOK OR THE PAPERBACK
AT AMAZON.COM BY CLICKING THIS LINK

*****
Meanwhile, for readers who prefer to stick with
The weekly blog episodes, we will continues
To post chapters until the story is done.
And, now, here is this week's episode!
*****


A TASTE OF VENGEANCE 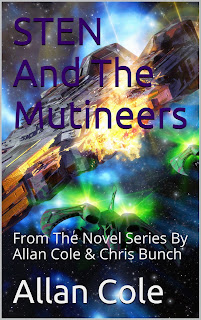 When Shaklin and his people reached Gregor’s cabin, the guards were gone—probably back at the Control Center gleefully helping murder Zheng and Rual.

Newton broke the lock, and Viktor and several others hauled Gregor out.

He was frightened. And more than a little confused.

“What’s happening?” he demanded. “Is Venatora coming? Should I call my father so we can finalize the deal?”

Shaklin laughed. “There is no deal,” he said. “There never was a deal.”

And with immense satisfaction he said, “Now, come with us.”

Gregor tried to protest. But Newton and Viktor, who were large enough to handle several Gregors, took him in tow and hustled him along the corridor.

“Where are we going?” Gregor demanded.

No one bothered answering.

A moment later they were in the Tractor Beam Chamber. Newton hurried to the control board, popped it open, and fiddled with the switches. Then he set the timer.

He grinned at Shaklin. “Ten minutes, Bishop. And we’ll be clotting out of here.”

“Please, please,” he was saying. “Just let me call my father. He’ll fix it. He can fix anything.”

But they were at the Cairn now, and Shaklin’s people boarded the little vessel, taking up the positions and duties he’d drilled into them. There hadn’t been much time, but the members of the Church of the Universal Location were not just devoted, but intelligent, highly trained technicians.

As Shaklin took up his post at the control board, Newton and Viktor hustled Gregor over to the lifeboat, which sat next to a launch tube just large enough to do the job.

He was arguing. Begging. Pleading. But no one paid him any mind.

Shaklin’s fingers flew over the controls. Big bay doors opened in front of the Cairn. He gave the boat a little power, and they slipped out of the Flame into space.

And now they were skimming along the ore train, heading toward the end of the 129 kilometer line.

Well, the end sans twenty nine cars they were cutting out for themselves. Shaklin grinned at the thought.

Don’t get over confident, he warned himself. He had to play each card perfectly. One mistake and all would be lost.

At last the ten minutes were up and a small explosion came where the train linked to the ship. The cars broke away, slowly drifting to the side from the force of the explosion.

Then they were in position. Newton did his magic and there was another small explosion, separating the last twenty nine cars from the train.

Shaklin guided the Cairn into place, latched on, then moved away—carrying the mini-train laden with precious Imperium X with him.

It was time to call Sten.

Oh, wait. Not just yet. Gregor first. Then Sten.

“Get him into the boat,” he told Newton and Viktor.

Gregor started, but the two big men grabbed him from either side and hustled him to the little lifeboat.

“Wait a minute,” Gregor said. “What are you doing?”

“Returning you to your father, what else?” Shaklin said.

Shaklin shrugged. “It’s for your own protection,” he said.

And it wasn’t that much of a lie. At this moment he was more than capable of doing Gregor great bodily harm.

“No, no. You must let me go. The Court Martial. They might…they might…”

“Shoot you?” Shaklin asked with a bitter laugh. “A firing squad is too good for you. But that was my agreement with Sten.”

Gregor’s face turned fiery red. “Sten? Why, he’s nothing but a poseur. Acts like an ordinary guy, but he’s got connections. That’s for sure. Connections he’s been lying about for years.”

“I’m glad to hear that,” Shaklin said. “Makes me even more confident that you have a firing squad in your future.”

Shaklin had enough. “Get him in there,” he said, jabbing a finger at the lifeboat.

Newton opened the little boat’s port, and he and Viktor grabbed Gregor and pushed him toward it. Gregor struggled mightily, but Newton gave him a hard swat and Gregor stopped struggling.

Now he was weeping.

Shaklin stared hard into his eyes. “Pegatha,” was all he said. He nodded for Newton and Viktor to continue.

They stuffed him, weeping, into the little boat. As they closed the port, the last thing Shaklin heard him say was, “It was an accident, I tell you. Just an accident.”

But Shaklin felt no vengeful joy when he turned back to the control board. Instead, he felt empty. And there was a bitter taste in his mouth.

Then he keyed his mike. Time to call Sten.

Well, my American publisher – Wildside Books – was listening and is issuing all three omnibus omnibus volumes on this side of the Atlantic. Sten Omnibus #1 was published
last month. Sten Omnibus #2 debuts this week. Stay tuned for the publication for Volume Three.
CLICK THIS LINK TO GET
THE STEN OMNIBUS #1
CLICK THIS LINK TO GET
STEN OMNIBUS #2
*****

What if the Cold War never ended -- but continued for a thousand years? Best-selling authors Allan Cole (an American) and Nick Perumov (a Russian) spin a mesmerizing "what if?" tale set a thousand years in the future, as an American and a Russian super-soldier -- together with a beautiful American detective working for the United Worlds Police -- must combine forces to defeat a secret cabal ... and prevent a galactic disaster! This is the first - and only - collaboration between American and Russian novelists. Narrated by John Hough. Click the title links below for the trade paperback and kindle editions. (Also available at iTunes.)