THE BEAUTY & THE SCOTSMAN 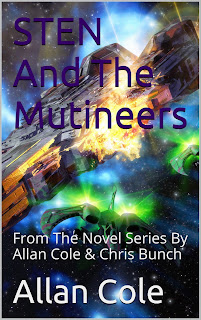 A gritty wind scratched Sten’s faceplate as he peered up at the sign.

Sten sighed. Unfortunately, the idiot in question was standing next to him.

Behind them he heard the scrape of a gravcab lifting off and turned, clumsy in his Hostile Atmosphere Suit, hoping against clotting hope he could hail it back. Knowing if he failed it’d be at least a day before they could get transport out of this wretched place.

But as he signaled the gravcab was already over the blood red mountain peaks, on to its next hire many kilometers away.

A cold wind flowed down from the peaks across an ancient seabed as red as the mountains. Deep carbon-black canyons cut across the land, with huge ebony boulders stacked crazily, one upon the other - left there when the seas boiled away long ago. The wind picked up the glittering red sand and flung it against the rocks in booming scarlet waves.

Sten turned back to consider: The scene before them looked nothing like what they had been led to expect. The other bumpot in this equation was the Leave Clerk. Corporal McKenna - she of the flowing blonde hair, the curvaceous body, the flashing eyes - had beguiled Alex as she painted an exotic word picture of the wonders that awaited them at Rec Area 477.

Sten had never seen Kilgour so enamored. Doting on every word that spilled from McKenna’s lovely Scots lips. Corporal McKenna played them a vid of a sparkling white Grecian palace, spread over several kilometers, floating gloriously on the “wine-dark” sands of Mining Planet 914.

She explained that the benevolent mining companies – whose motto was “Morale Comes First” - spared no expense when it came to entertaining the miners, contractors, and the many other trades and professions it took to keep the Imperium X flowing to the Eternal Emperor’s vast storage centers.

The Rec area on MP914 was only one of many such entertainment centers spread over a newly discovered region that was blessed with a plethora of planets, dwarf and otherwise, rich with that rare and economically vital mineral.

But Corporal McKenna, who could pour it on like a Gaelic poet, insisted Rec Area 477, was the most wonderful of all. Offering the strongest drink, the most delicious food, as well as the most glamorous and eager joygirls and joyboys. Best of all, she said, its spirited gambling - with the best odds – was beyond compare.

She was so eloquent, so enthusiastic, that the thought niggled at the back of Sten’s brain that maybe the corporal had a commissioning deal with the entertainment center.

Alex would have none of it. “Oh, my puir, puir laddie,” he’d said in a brief moment when they were left alone to confer. “Ah’m ashamed ay ye. Sech a suspicous mind. Hoo can ye doubt sech a brammer lass, with only our best interests at heart?”

“Think you’re going to score with her, don’t you?” Sten teased.

“Weel, Ah would nae rule it out, laddie,” he’d answered. “Me mum al’ays said Ah was a braw figure ay a cheil.”

Alex was a heavy worlder – as wide as he was tall and all of it dense muscle. But, as for presenting a “braw figure” – well, only a loving mother could have described it as such.

However, he was also Sten’s best friend. A friend who had saved his life countless times, and so who was Sten to spoil his friend’s chances with the lovely Corporal McKenna?

But as he examined the place where they were supposed to spend the next e-week, he realized just how apt the saying was that, “no good deed ever goes unpunished.”

There was no Grecian palace, of course. Instead, Sten and Alex were standing before the ruins of what Sten thought had once been an in-system passenger ship, with a bulbous nose and stubby winglets.

Some bright mining company Veep, no doubt, had wrangled a bonus for pimping the money-saving idea: instead of scrapping the old ship, they could plunk it down on one of the Fringe Region’s mining planets. In this case, MP914.

A little repurposing here and there, and they could soon have a wondrous gambling hell for their workers. And they could churn their employees’ wages back into the company coffers.

The fact that MP914 was a working mining planet was underscored with some regularity. The ancient seabed was pocked with enormous vents, charred like the bores of ancient gunpowder cannons.

The purpose of those vents soon became apparent when the ground began to shake under them, and then a huge column of fire and smoke burst from the very bowels of the planet, boiling against azure skies.

As the cold sandy wind rattled and scratched against his HA suit, Sten thought that if Hell was cold instead of hot, it must look a lot like good old MP914.

“If we can’t at least get that,” Sten said, “I’m going to personally strangle your girlfriend at the Leave Office.”

Sten couldn’t help but laugh. “Oh, so she stood you up after all, huh?” he said. “You never let on.”

“Especially when there is nothing to tell,” Sten said.

Alex had enough. “Ah’m thirsty,” he said, and he took Sten’s arm in a steely grip and powered him up the ramp to the forbidding entrance of Rec Area 477.

NEXT: HELL ON WARP DRIVE


NEWLY REVISED KINDLE EDITIONS OF THE TIMURA TRILOGY NOW AVAILABLE. (1) When The Gods Slept;(2) Wolves Of The Gods; (3) The Gods Awaken.

After laboring as a Doctors Without Borders physician in the teaming refugee camps and minefields of South Asia, Dr. Ann Donovan thought she'd seen Hell as close up as you can get. And as a fifth generation CIA brat, she thought she knew all there was to know about corruption and betrayal. But then her father - a legendary spymaster - shows up, with a ten-year-old boy in tow. A brother she never knew existed. Then in a few violent hours, her whole world is shattered, her father killed and she and her kid brother are one the run with hell hounds on their heels. They finally corner her in a clinic in Hawaii and then all the lies and treachery are revealed on one terrible, bloody storm ravaged night.